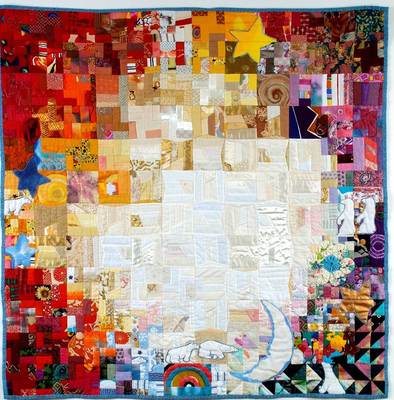 “My polar bear quilts arrived on a variety of pathways. These quilts imagine the polar bear journeying through the universe – sun, moon, sky. The arctic in my imagination appears as vast expanses of snow and light. The quilts began in my mind as white quilts, and quickly exploded into color and illumination.

I created the polar bear patchwork motif in a class on Escher and tessellated design at a San Diego Visions Symposium. The polar bear has fascinated me as a fierce animal image with the appearance of gentleness. In the last few years the threat of global warming to the arctic ice has made the polar bear an icon for environmental issues. The polar bear may soon be counted among the endangered species.”

Las Fallas is a traditional celebration in Valencia Spain in honor of Saint Joseph. Each neighborhood creates a gigantic puppet of cardboard, wax, Styrofoam, etc., stuffed with firecrackers and mounted on wheels, called a “falle” or “torch.” These fallas are paraded in the streets. The mascleta or setting off of firecrackers occurs every day at 2 in the afternoon during the celebration, and fireworks light up the sky the last nights of the celebration. On the final day of the festival, all of the falles are burned and the firecrackers adorning them are set off. It is unimaginably loud and bright. Despite hints in the sky of the aurora borealis that is part of the polar bears’ habitat, the festival here suggests the global warming that places polar bear survival at risk.