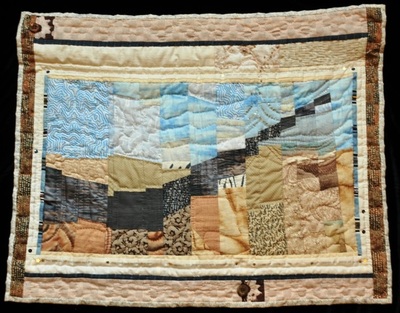 While visiting California Western School of Law in San Diego, where there is so much tension over the US/Mexico border, Patricia saw an art installation around the idea of borders jointly produced by the arts communities in San Diego and Tijuana. This quilt expresses the irony of constructing a fence between people - in this case continuing out to sea so that one wonders if the fish observe the lines.

Quilt Detail: In memory of Esequiel Hernandez, Jr., a Texas teenager killed while tending goats near his home at the border, 1997.

Before I built a wall

I'd ask to know

What I was walling

in or walling out."

From the collection of Professor Taunya Banks.