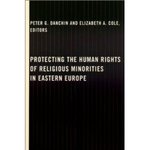 Protecting the Human Rights of Religious Minorities in Eastern Europe

The ousting of the communist regimes has not guaranteed the protection of human rights. The historical reality is that discrimination against minority religious and ethnic groups is often part of a broader monolithic nationalism. As official atheism is replaced by varying models of church-state arrangements, how much will the rule of law prevail against resurgent nationalism and intolerance toward minorities? These nineteen essays consider this question. The authors represent eleven countries (four essays discuss Western Europe ) and include theologians, political and social scientists, legal scholars, and human rights professionals. Whether considering Bulgaria's policy toward Muslims or Christian-Jewish dialogue in Poland, these provocative essays shed new light on human rights in a globalizing world.